The Douglas C-47 Skytrain is a military transport aircraft that was developed from the civilian Douglas DC-3 airliner.

The military career of the Douglas DC series began in 1936 when the Army Air Corps ordered a pair of DC-2s under the designation C-32. A contract followed for 18 DC-2s in the C-33 freighter configuration and two more as C-34 staff transports.

In 1937, the Army ordered a plane built to its own specifications. It was a hybrid design that combined the fuselage of the DC-2 with a DC-3 tail. This was the sole C-38 prototype and it led to 35 production versions called the C-39. The C-39 represented the first serious effort by the Army to establish an airlift capability.

By 1941 the old Air Corps had been transformed into the Army Air Forces, and it selected a modified version of the DC-3, the C-47 Skytrain, to become its standard transport aircraft.

As a supply plane, the C-47 could carry up to 6,000 pounds of cargo. It could also hold a fully assembled jeep or a 37 mm cannon. As a troop transport, it carried 28 soldiers in full combat gear. As a medical airlift plane, it could accommodate 14 stretcher patients and three nurses.

Seven basic versions were built, and the aircraft was given at least 22 designations, including the AC-47D gunship, the EC-47 electronic reconnaissance aircraft, the EC-47Q antiaircraft systems evaluation aircraft and the C-53 Skytrooper troop transport version. The C-53 lacked the reinforced cargo floor, large cargo door, and hoist attachment of the basic C-47.

The Navy version was known as the R4D.

It is thought by some that the "DACoTA" name originated from the "Douglas Aircraft Company Transport Aircraft".

The Lisunov Li-2, originally designated PS-84, was a license-built Soviet version of the Douglas DC-3. A total of over 4,900 aircraft were produced of all Li-2 variants between 1940 and 1954. Several airlines, including Aeroflot, flew the variant.

After WWII, Douglas offered a new model to airlines: the DC-3S or "Super DC-3", which was was 39 in longer than the original DC-3. It carried up to 30 passengers, and featured increased speed to compete with newer airliners.

The C-47 differed from the DC-3 in numerous modifications that included being fitted with a cargo door, a strengthened floor, a shortened tail cone for glider-towing shackles, and an astrodome in the cabin roof (see comparison below). 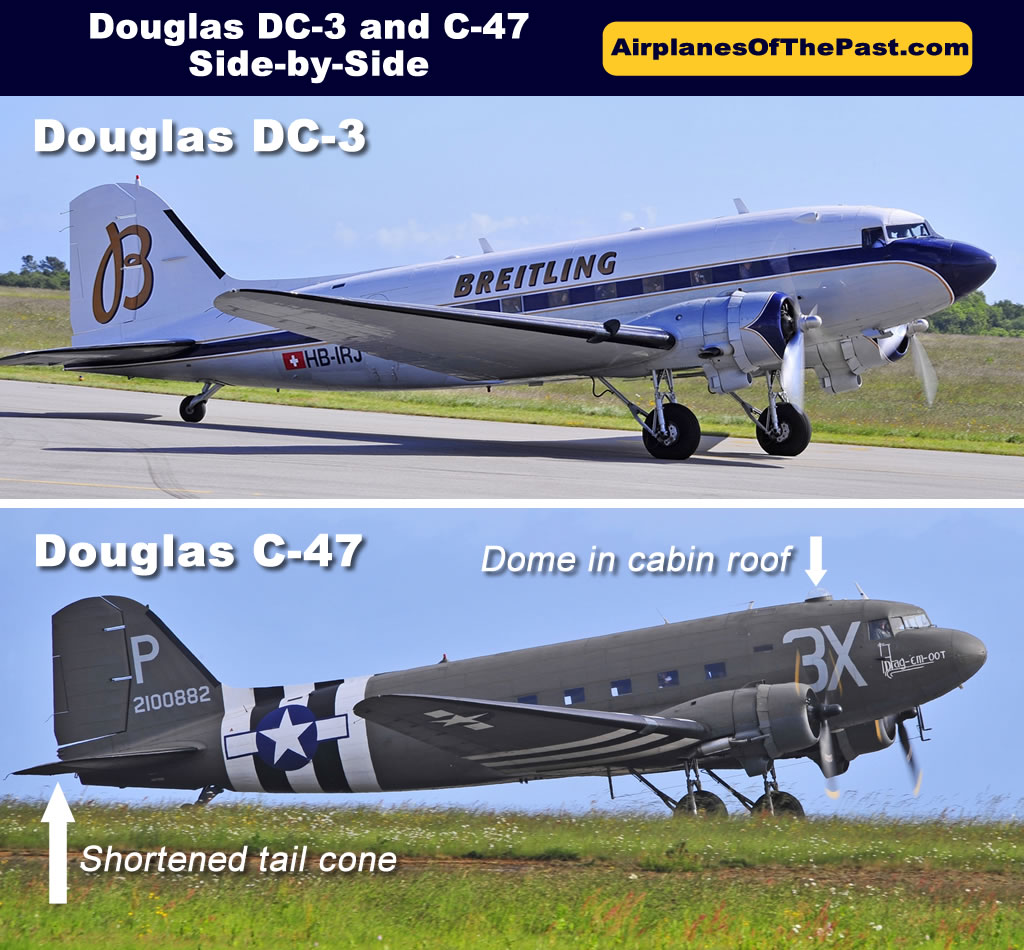 During World War II, the armed forces of many countries used the C-47 and modified DC-3s for the transport of troops, cargo, and wounded.

Operation Overlord was the code name for the Battle of Normandy, the Allied operation that launched the successful invasion of German-occupied Western Europe during World War II. The operation was launched on June 6, 1944 with the Normandy landings and featured a 1,200-plane airborne assault including hundreds of C-47s.

Another influential role in military aviation was flying "The Hump" from India into China. The expertise gained flying "The Hump" would later be used in the 1948 Berlin Airlift, in which the C-47 would play a major role.

The C-47 earned the informal nickname Gooney Bird in the operations during World War II.

More than 10,000 C-47 aircraft were manufactured at plants in Oklahoma City and in Santa Monica, CA.

After World War II thousands of surplus C-47s were converted to civil airline use. Other C-47s remained in active military service and played a critical role not only in the Berlin Airlift, but also in the Korean and Vietnam wars. In Vietnam, the C-47 served as a transport plane, but it also flew a variety of other missions, including ground attack as gunships, reconnaissance, and psychological warfare.

Today, some remain in operation as private aircraft. Many other surviving C-47 aircraft have been restored and are on static display across the country.

Others have been maintained in air worthy condition, and can be seen on air tours and air shows.

The oldest surviving DC-3 is N133D, the sixth Douglas Sleeper Transport built in 1936.

Photos by Our Friends and Supporters

More Information about the C-47 and DC-3

The DC-3 Commercial Transport at Boeing

DC-3 at the Delta Airlines Museum