We live in Texas, and frequently fly in and out of today's modern Texas airports such as DFW and IAH. We also recall their predecessors from the 1950s, such as Love Field, Hobby Airport, and Amon Carter Field. A recent visit to the site of Amon Carter led to the development of the content discussed herein.

Prelude to a New Fort Worth Airport

In 1925 the city of Fort Worth established the Fort Worth Municipal Airport. Renamed Meacham Field in 1927 in honor of former Fort Worth Mayor H.C. Meacham, it remained the hub of commercial flights until the early 1950s.

As air traffic at Meacham grew during the 1940s, so did the city surrounding it. A new site was selected after much discussion, planning and haggling with Dallas. The site was south of today's DFW airport, and just east of the C.R. Smith American Airlines Museum, as shown below. 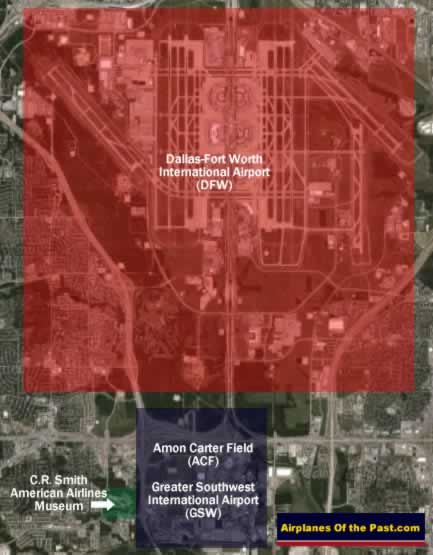 Construction of Amon Carter Field in Ft. Worth, Texas

Construction occurred during 1951-53, and Amon Carter Field was officially opened in the spring of 1953, named after the local legendary businessman.

Parked at the opening ceremonies were Convair B-36H (S/N 51-5736) and XC-99 (S/N 43-52436) aircraft. American, Braniff, Central, Continental, Delta, Eastern, and Trans-Texas Airways were among the carriers operating from the airport. It was assigned airport code ACF.

Two major runways were provided, each about 6,500 feet in length: 17/35, and 13/31. In 1962 runway 17/35 was extended to the north by 2,000 feet, necessitating the construction of a tunnel under the runway for Route 183. A passenger terminal with two concourses, ticketing, and restaurant facilities faced to the west, towards Fort Worth, away from Dallas.

The name was later changed to Greater Southwest International Airport, airport code GSW. The airport enjoyed moderate success over the years, but competition from Love Field in Dallas gradually reduced usage of GSW.

The Demise and Demolition of GSW Airport

In addition, the FAA dictated that Dallas and Fort Worth needed to join together in the building of a new airport to service both cities.

With the opening of Dallas Fort Worth International Airport (DFW), GSW began to be shut down, and was closed on January 13, 1974.

The GSW terminal was demolished in 1980, and the last of the runways were removed by 1982.

The B-36 Peacemaker "City of Fort Worth" at GSW

The Convair B-36 Peacemaker was one of the largest airplanes ever built, and was a key element in maintaining peace during the Cold War with Russia during the 1950s.

These giant planes were built in Fort Worth by the Consolidated Vultee Aircraft Corporation (later known as Convair) at its Carswell Air Force Base assembly plant.

For several years, the last plane in the series, a retired B-36J with serial number 52-2827, and inscribed as the "City of Fort Worth", was on static display at GSW.

After GSW closed, the B-36 was moved, and significant efforts were made over the years by local groups to restore the plane and keep it in Fort Worth.

Today, the plane is on display at the Pima Air and Space Museum adjacent to Davis-Monthan Air Force Base in Tucson, Arizona. It is only one of four surviving B-36 Peacemakers.

After the airport was abandoned, for a time GSW's runway 17/35 was converted for use as Amon Carter Boulevard; eventually it was replaced with the new boulevard in use today.

The major remaining 1,600 foot trace of GSW lies just north of the boulevard, on the north side of Highway 183: the northernmost end of runway 17/35 and a bit of taxiway and runup pad. 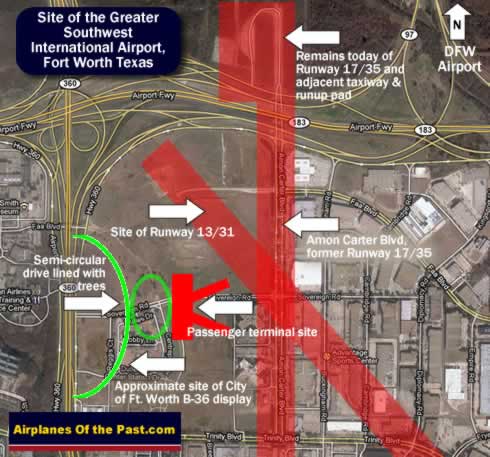 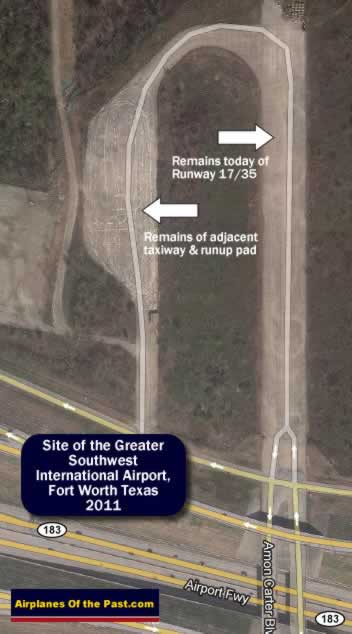 Viewed from a satellite photo, on the western side of the GSW site, the outline of the semi-circular driveway serving the passenger terminal can still be seen today. Trees lined the driveway, and remnants could still be seen in photos from 2005, and 2011, as shown below.

One of our favorite airlines that served Amon Carter - GSW and Pounds Airport in Tyler over the years was Texas' own Trans Texas Airways (TTA).

As with the DC-3s, the Convair airliners were purchased from American Airlines, whose maintenance records indicated the aircraft were in extremely good condition.